Negotiations For Kamaru Usman And Jorge Masvidal Fight Are 'Done'

Manchester City's deadline day transfer activity proved a bit of a head scratcher. Especially to those of us who want to believe that Pep Guardiola's team still has a genuine commitment to youth development.

The club spent the day desperately trying to lure ready-made, 28-year-old superstar Alexis Sanchez through the front door. Meanwhile, one of England's highest-rated teenagers walked out the back for good.

Seventeen-year-old winger Jadon Sancho's £8 million departure to Borussia Dortmund was a worrying sign. To me - a lifelong Manchester City fan and a former member of the Manchester City academy - the Sancho out, Sanchez in plan raises some questions.

Like what exactly was the point in building the new, state-of-the-art, £200 million City Football Academy if chances to advance into the first team are almost impossible to come by, even for the best youth players at the club?

And is Guardiola - who was hired partly for his reputation as a developer of young footballers - still the same manager whose faith in homegrown talent won him so many admirers during his all-conquering spell as Barcelona boss?

On his way out, Sancho had a damning message for the club.

"The time is right for a new challenge where I can start to fulfil my potential," he wrote on Twitter.

In the era I played in the academy (between 2004-2009), as far as fulfilling your potential was concerned, Manchester City was the place to be. 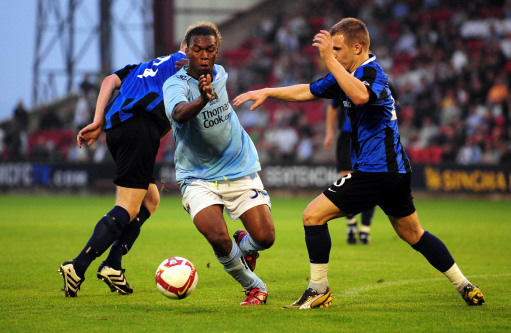 My teammates and I watched older comrades - Steven Ireland, Micah Richards, Michael Johnson and Daniel Sturridge to name a few - regularly make Premier League debuts. Role models for the rest of us, their progress fuelled a belief in academy changing rooms that if you were good enough you would get your chance at City.

The departure of Sancho, this summer's Under-17 European Championship Player of the Tournament, is the latest evidence that might no longer be the case. He was offered a professional contract at City, but he decided to turn it down.

:clap: That pass from @England's Phil Foden, though. The finish by Jadon Sancho isn't bad either. :fire: #U17EURO pic.twitter.com/DzxUVAyAKe

And can City fans really blame him? If he stayed, the winger would be competing for game time in an attack boasting Raheem Sterling, Leroy Sane, Kevin De Bruyne, Bernardo Silva, Gabriel Jesus and Sergio Aguero. City's keenness to add Arsenal's Sanchez to that group was public all summer.

By contrast, Dortmund promised Sancho matches as well as the number No 7 shirt - a shirt most recently worn by Ousmane Dembélé, now of Barcelona. His career trajectory in one season at Dortmund is a clear endorsement of the club's own development skills. All told, the German side's offer would be tempting enough for most players in Sancho's position to go. 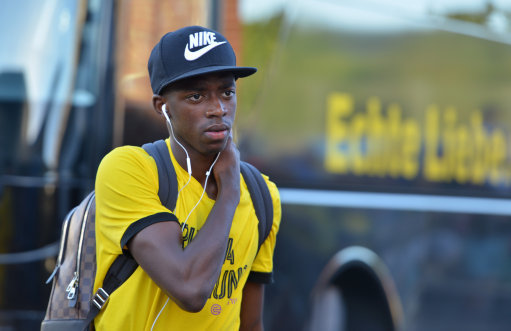 Dortmund's Ousmane Dembele leaves the team bus at the DFB Cup 1st round football match between SV Eintracht Trier and Borussia Dortmund at the Moselstadion Stadion in Trier,...
Image: PA

But it didn't have to be this way. Scrolling further down Sancho's Twitter profile reveals a 17-year-old with his sights set on breaking into Guardiola's senior squad.

"3 young boys all following 1 dream," he wrote this summer next to a picture of himself and his two ex-academy teammates Brahim Díaz and Phil Foden.

The talented trio were all tipped by Manchester City chairman, Khaldoon Al-Mubarak, to step up into the first team soon. Out of the recent Youth Cup winning side, they looked the lads most likely. Dressed in blue beside the City Football Academy pitches, their arms are outstretched, ready to take on the world. At the time, Sancho's dream certainly still seemed Manchester-based. That dream has obviously since soured.

My own academy journey ended when coaches deemed me not ready to step up to the next level. It was crushing but it's a fate that falls on of 99% of youth players. That's football. However, in my era at the academy, it would be almost unthinkable for a player with undisputed talent like Sancho to leave City because of a lack of opportunity.

Along with the swelling trophy cabinet, this has arguably been the most significant change at the club over the past decade or so. It is a weird relationship continuing to support the club that released you, as I'm sure many ex-academy lads would agree. But after my departure, I continued watching City (often from the stands), as we transformed from a mid-table outfit stacked with local academy graduates into a big-spending, trophy-chasing megaclub. The club continued to preach youth development, and invest heavily in it, but the pool of players regularly progressing into the first team dried up.

Then Pep Guardiola's arrival promised something more. If anyone could blend the superstars City were now able to attract and nurture some academy starlets at the same time it was him. After all, the Catalonian already achieved that feat once with spectacular success in Barcelona. As history tells us, his mixture of La Masia graduates - some promoted by Guardiola from the Barcelona B team - with a handful of star names went on to win every trophy in club football.

That's the model many City fans hoped and expected he would follow in Manchester, myself included. His reputation as a developer of young talent was a big part of the owners' keenness to bring him in. But disappointingly, this has not yet proven to be the case. Barcelona manager Josep Guardiola is thrown into the air by his players after winning the UEFA Champions League Final
Image: PA

Losing one of Europe's brightest prospects to a Champions League rival is more proof of an imperfect youth system at City. The bridge between academy and first team is proving almost impossible to cross. The Bundesliga club's announcement of Sancho's signing hammered that point home.

"We're delighted that Jadon Sancho wants to and will play for Borussia Dortmund," said the club's sporting director Michael Zorc. "We're convinced that we'll be able to help this very young player to further develop his game and to make him into a valuable addition to our team."

Back in Manchester, there is a manager who was hired to do just that type of thing.

Three young dreamers have become two at City. But at least the sight of Phil Foden, a local lad from Stockport, sitting on Guardiola's bench every week has provided some fresh hope. 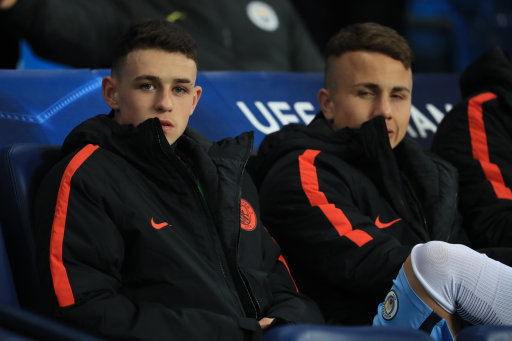 Over the next couple of seasons, the progress of Foden and Brahim Díaz will be monitored with interest. Alongside winning silverware (with one of the most expensively-assembled squads in football history), blooding these two homegrown talents is beginning to look like a defining challenge for a club and a manager whose reputations for youth development are now hanging in the balance.

The City fans are crying out for an academy success story. Will the real Pep Guardiola please stand up?