Anthony Martial made his first appearance of the season for Erik ten Hag's men on Monday night, and showed his importance almost immediately.

Manchester United finally picked up their first win of the Premier League season under Erik ten Hag when they triumphed 2-1 over Liverpool.

The second of these two goals was assisted by the Frenchman, and came just eight minutes after he was substituted onto the pitch, creating an instant impact.

This assist was a moment of brilliant quality from United’s number nine, pouncing on a loose touch from Liverpool captain Jordan Henderson initially.

The ball bobbled slightly, but Martial showcased his typical quality as he brought it under control without losing it. He then played a perfectly weighted through ball for Marcus Rashford who slotted home.

This was of course just the cherry on top for Martial, who continued on from a pre-season campaign which hinted at a revival after two seasons of struggle with an excellent performance.

In a second half where United were defending the lead for large parts, Martial's technical security helped to slow the game down in crucial moments.

It also helped create some valuable transition opportunities for the Red Devils, who could've had a couple more goals had their actions been executed better. 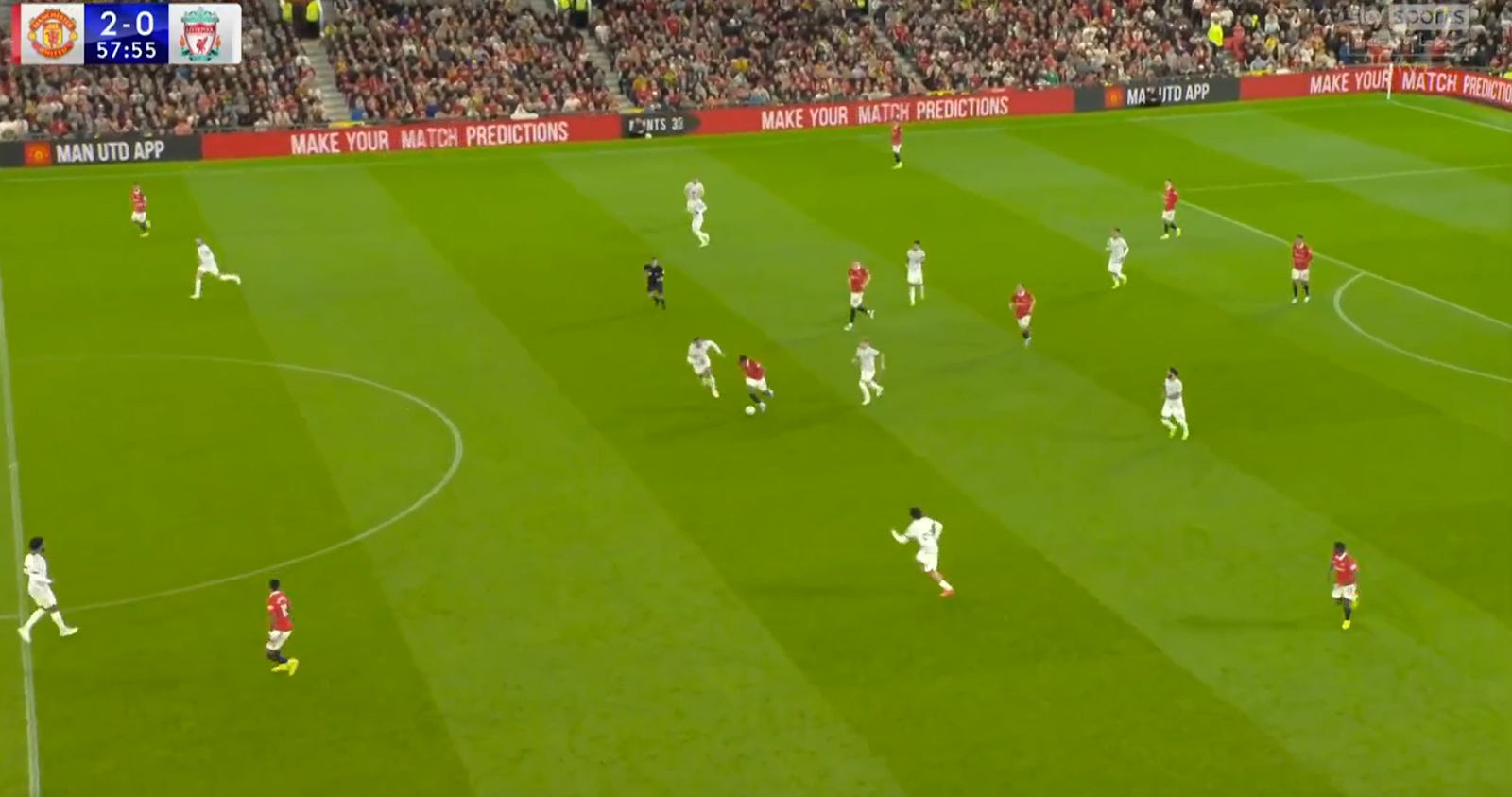 … but Martial retains the ball excellently under pressure. He then plays it to Rashford, who looked to find Fernandes on the far right but couldn’t quite pick him out (Sky Sports)

Another thing that helped lead to some of these transitions was his willingness to run in behind, which looks to be improving so far under Erik ten Hag.

This - along with Rashford doing the same - vertically stretched Liverpool, making it difficult for them to press so high without leaving themselves vulnerable defensively.

Sancho picks the ball up in his half and Martial immediately starts sprinting in behind Van Dijk. (Sky Sports)

Sancho plays him in, with acres of space for United. Martial cleverly slows down the transition to allow his fellow attackers to catch up. (Sky Sports)

Martial tries to find Sancho, but Liverpool just about stop him from potentially creating a third goal. (Sky Sports)

Towards the end of the game, with United hanging onto a one goal lead, he almost sealed United’s victory after a sublime piece of skill put him in behind Liverpool’s defence. 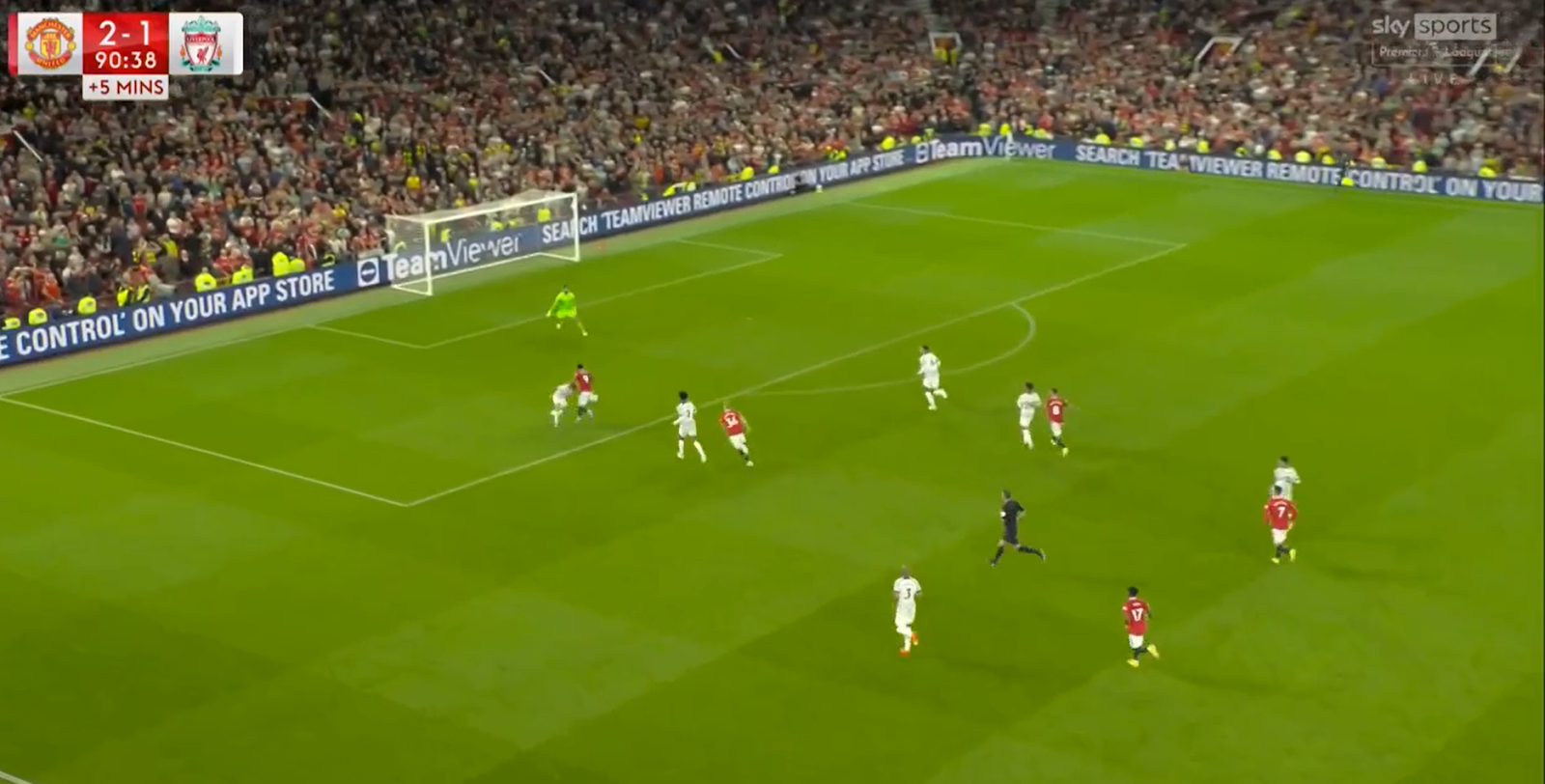 This skill alone probably deserves an entire article dedicated to it. How he pulled it off is almost inexplicable, and almost certainly would have led to a goal if not for Alisson’s alert goalkeeping.

Martial looks to slip it to Van de Beek, who makes a clever supporting run, but Alisson is alert to the danger. (Sky Sports)

In just 45 minutes, Anthony Martial was so impactful for Manchester United. It is clear to see why Erik ten Hag loves him so much, his qualities make everyone around him a much better player.

Combine Martial’s second half performance with the greater intensity from the first half, where legs were fresher, and you have a genuinely scary sight up front at Old Trafford.

Martial is Ten Hag’s first choice striker as he looks to rebuild the club and nights like this show why he has made this the case despite his prior struggles, United must do everything they can to keep him fit.

Sergio Ramos now admits Lionel Messi is the greatest ever

Taxi driver once drove 75 miles to give Manuel Neuer his wallet back, only to be left disappointed

'Disgusting!' - Gabriel sends Vinicius Junior airborne with one of the worst challenges we've ever seen in La Liga