Manchester City’s search for a left back hit a stumbling block when they found themselves at odds with Brighton over the pricing of Marc Cucurella.

Pep Guardiola has never been one to complain about the squad and make desperation moves, and City have mostly moved on to other targets.

One such target then appeared to be RSC Anderlecht’s Sergio Gomez.

Multiple sources since reported Manchester City’s interest in the Spaniard, including David Ornstein, and this week, Sergio Gomez finalised a move to the Etihad Stadium.

OFFICIAL: Sergio Gomez has signed a four-year contract at #ManCity until the summer of 2026. pic.twitter.com/CRbdzWDAMT

Stylistically, Sergio Gomez is different to Marc Cucurella, at least in his overall usage at Anderlecht.

Cucurella is a ball carrying left back who frankly could masquerade as a central midfielder when Brighton attacked.

This is also demonstrated by the fact he played centre-back relatively regularly for the Seagulls. He is capable on the overlap and has a good cross, but it is likely he would have played as an inverted full back for Manchester City.

Sergio Gomez on the other hand is more direct and aggressive as a passer than Marc Cucurella, and is very productive on the overlap, being able to create high quality chances and be accurate with his cut-backs.

In scouting, it makes sense to put some context around the player and try and highlight their role in the system they are being asked to play in.

Anderlecht’s system under the now-Burnley manager Vincent Kompany was very unique, and Gomez’s flexibility was a big reason it worked so well.

Anderlecht played a hybrid 4-3-3/4-4-2 system in which both full-backs and wide players were often asked to fill both centrally, and as the players holding the width.

Kompany learned under more managers than Pep Guardiola, but it is clear he shares the emphasis on using the entire width of the pitch to stretch opponents.

As you can see above, Sergio Gomez is providing the width in the formation.

His winger tucks inside and to allow him the space whilst on the other side, central midfielder Josh Cullen drops in to allow the right sided players to push up and out.

Gomez is the switch and isolation option in this phase of play though and it’s something you often see him do.

The average positions from this game showcase the unique nature of the system Vincent Kompany implemented at Anderlecht. 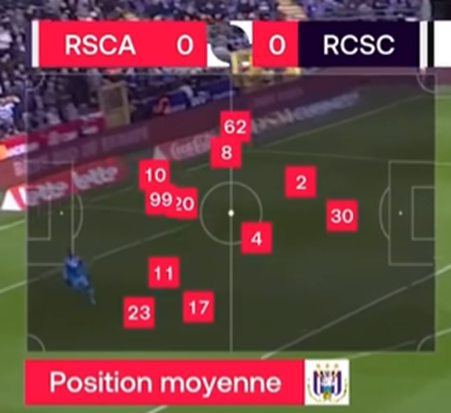 You may wonder about what relevance this holds.

Essentially, it shows Gomez is playing in a system that uses him high and wide. He effectively plays as a wing back at times and there is a lot of responsibility on him to create.

He also displays the tactical intelligence and versatility to play in different ways.

He doesn’t shy from the responsibility, being a willing runner and accurate passer with a high probability of being able to play with both feet. A system which requires wingers to stay narrow will fall apart without dynamic and pacey full backs, but Gomez’s left hand side was pivotal to Anderlecht’s attacking effectiveness.

His 12 assists and 15 big chances created showcase the volume of productivity, but this wasn’t some statistical fluke as shown by deeper and more advanced numbers.

His 1.7 key passes per game ranked 22nd in the Jupiler Pro League. Every player listed above him was a midfielder or a forward. He produced forward like passing numbers while playing left back.

Gomez possesses the pace to punish teams playing a high line, and he will exploit teams who try and overload another area of the pitch defensively.

This is something that scales well when you play for Manchester City because teams have to pick their poison and often end up giving attention to one particular area of the defensive third in their gameplan. Take the sequence below.

Anderlecht’s left winger drifts inside, striker Joshua Zirkzee drops into the channel, and Gomez punishes the defenders focus on the central overload by bombing in behind, firing an excellent cross into the six-yard box that should be converted by Lior Raefelov.

Gomez is a relatively accurate crosser at 19 percent and it’s easy to see why.

He’s willing and is able to angle the passes where he wants to as opposed to just blindly firing it in the general direction of the six-yard-box. It’s easy to imagine him punishing teams down the flanks as with Erling Haaland’s arrival, teams will have to overload the center to try and stop his elite movement.

Though I differentiated between Gomez and Cucurella’s styles, it must be noted Gomez is still a good ball carrier.

His 60 percent dribble completion is above average. He can carry the ball well which makes sense given he was originally a wide player during his time in Spain.

Though Anderlecht were better when Gomez overlapped, Kompany did require Gomez to sit deeper on occasion as the logic of this system was to ensure they didn’t become predictable.

Both full backs had their opportunities to push forward but due to the fluidity of the front line, sometimes Gomez was asked to sit deeper in order to allow the forwards to move into the left channel.

This is where he showed promise as a long passer and as someone who could break the lines.

Above, he’s pressed aggressively on the touchline. He has the safe option of Josh Cullen inside, but he uses his right foot to play a tough pass into the channel. Players who attempt the aggressive option and convert it regularly are hard to find, but Gomez ticks this box.

Analysing the defensive nature of full-backs can be difficult, especially in teams that dominate the ball. Also, focusing too much on defending is how you end up spending £50 million on Aaron Wan-Bissaka. However, Gomez appears to be solid defensively. His 59 percent ground duel win rate is well above average, especially given his build.

Gomez was arguably Anderlecht’s most important player this year. Though their system was reliant on shared responsibility, they were at their best when Gomez was overlapping and firing crosses into the box or pushing to the by-line to give his winger a lot of space to operate.

He had 10 assists in the League within the first four months of the season. He’s aggressive with his passing and crossing which is important as hesitancy can stall attacks. But on top of this he has good accuracy and good decision making. It’s surprising to hear he wouldn’t be part of the city first team if he signed, especially given there aren’t many other internal options at the position at this point in time.

Though Gomez’s role at Anderlecht probably won’t scale directly to City given most teams just sit in a deep block against them, his versatility will scale well. He’s an accurate crosser who can get power on the ball from standstill positions. He’s an above average passer of the ball and his movement and finishing is surprisingly good for a full back, again lending to the fact he used to be a wide player.

He’d add a different dimension to City as someone who can hit accurate drilled crosses and provide a high-tempo meaningful overlap for the likes of Jack Grealish and Phil Foden. If possible, this is a signing City should get done sooner rather than later.