Well, that was eventful.

The weigh-ins for the George Kambosos Jr vs Devin Haney unification bout descended into chaos when the Aussie fractionally missed weight.

He did eventually return 45 minutes later and made the weight, hilariously joking that it was “deception” before claiming “maybe I did it on purpose”.

Order now on Main Event on Kayo Sports for $59.95. No Kayo subscription needed.

He added: “Art of war, deception, maybe I did it on purpose.” 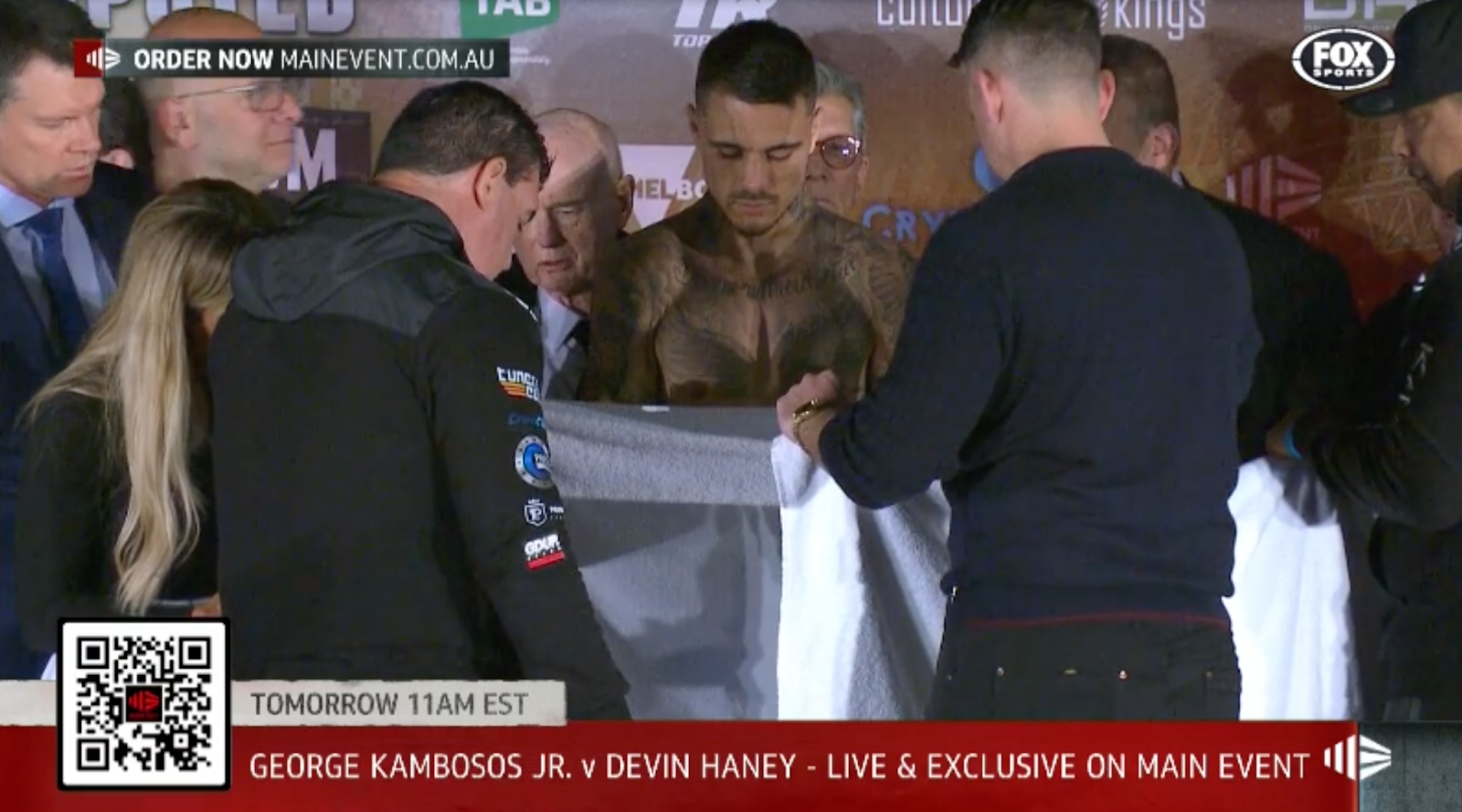 News of Kambosos Jr’s first missed weight attempt sparked a wild reaction from the Haney camp who clearly took exception to it all.

Tensions then boiled over as the two men proceeded by exchanging verbals while going nose-to-nose on the stage.

After things calmed down a bit, Kambosos Jr was then given two hours to make the lightweight division’s 135-pound limit - which, of course, he did.

But honestly, what unfolded at the weigh-ins just added another bite to this already-tasty clash.

After the majority of the card weighed in, all eyes turned to the main even with visiting American Haney was called to centre stage.

Accompanied by an entourage of about 46 huge blokes, Haney made his way to the scales.

As his weight was called out by the announcer, the 23-year-old flexed and posed for the flashing cameras as he waited for his opponent to arrive.

Kambosos Jr was greeted with a hero’s welcome inside Margaret Court Arena in Melbourne with sections of supporters breaking out into a chorus of Greek chants.

But as Kambosos Jr stepped onto the scales, the Aussie’s bright sunny morning in Melbourne quickly turned into a nightmare.

With no weight being called out for the PA system, dead silence, whispers started ringing out around the stadium.

The longer and longer Kambosos Jr remained on the scales, with more and more officials leaning over to check what it read, people started fearing the worst.

And their fears were confirmed when it was revealed that Kambosos Jr had, in fact, missed weight.

Upon hearing this, Haney and his camp stormed across the stage to confront Kambosos Jr, sparking a fiery melee on stage.

The push-and-shove was eventually defused and Kambosos Jr swivelled around to face the passionate crowd who cheered his name.

About an hour later, Kambosos Jr returned and subsequently made the required weight.

“I took a piss,” he said when asked what measures he took during the cut.

He added: “This changes nothing! It changes his mindset now. Trust me, art of war, deception.

As for Haney, he wasn’t too impressed.

“I knew what I had to do, I made weight, and I’m a true champion.

“I mean he’s sucked up, he’s dry, I don’t know, it is what it is, we’ve still got to go in there and fight. But I’m a true champion and true champions make weight.”