Formiga Set For SEVENTH Appearance And Watch Out For Jamaica's 'Reggae Girlz'... 28 things to know about Women's World Cup

The biggest prize in women's football is up for grabs this month with the World Cup set to kick off in France on Friday night.

The hosts take on South Korea in the opening game of the tournament, which will see 24 teams battling to be crowned world champions on July 7.

To get you up to speed on all things Women's World Cup, here are 28 things you need to know about this summer's tournament.

It's 24 teams, split into six groups, meaning the top two qualify as well as the four best third-placed teams. Cue Jonathan Pearce's brain exploding as he tries to calculate the permutations during the final group games.

Three group matches stand out: England v Japan sees the Lionesses go for revenge against the side they lost to in the 2015 semis, the US face Sweden for a record sixth time at a Women's World Cup, while rising power Australia take on South American giants Brazil.

Practise miming a big screen: VAR will be used at a Women's World Cup for the first time in 2019. As we saw in the men's tournament last summer, this automatically means a total absence of controversial decisions. Right?

Outside of the favourites - USA, France, Germany and, yes, England - Spain are dark horses to spring a surprise. The only European side with a perfect eight wins out of eight in qualifying, Jennifer Hermoso - just Jenni to her pals - is their star.

There are four WWC newcomers: Chile, Jamaica, Scotland and South Africa. Scotland are the best of the bunch but keep an eye on Jamaica's 'Reggae Girlz'. The first Caribbean team ever to qualify are captained by nearly 6ft-tall striker Khadija 'Bunny' Shaw.

Dead-eyed Australian striker Sam Kerr is among the Golden Boot favourites and is odds-on for the equally important (in our eyes) award for best celebration. Her trademark epic flips put Nani - or at least Robbie Keane - to shame.

Scotland's Euro 2017 began with a 6-0 mauling by England and the same two teams kick off Group D on 9 June. The Lionesses and Japan are favourites for the top slots; Scotland will need Arsenal midfielder Kim Little to be at her best to cause an upset.

World's best player won't be there!

Ada Hegerberg, Ballon d'Or winner in 2018, won't be at the World Cup as Norway's record goalscorer fell out with her FA back in 2017. "We tried to solve it, we had meetings, but she decided not to play," said manager Martin Sjogren, presumably while trying not to weep openly.

France in group of death

France are among the favourites, but their Group A is competitive. South Korea and Norway are in the top 15 of the FIFA rankings, while Nigeria are the best African side. The stylish hosts will almost certainly top the group, but the battle for second looks tight.

Phil Neville has a settled England squad, but for a 2019 breakout star, keep an eye on Arsenal's ball-playing centre-back Leah Williamson. The classy 22-year-old might not begin in the first XI, but make no mistake: she is the future of the Lionesses backline.

Goodbye to The Greatest?

Marta, dubbed 'Pele in a skirt' by the man himself (she actually plays in shorts, Pele, but he means well), could be starring in her last World Cup. The tournament's record scorer is 33 years old and while Brazil have struggled in the build-up, she'll be aiming to add to her 15 WWC goals.

"A young chicken with a passion for life and football" is the official word on mascot Ettie. Daughter of Footix, the big blue cockerel who lorded over the 1998 World Cup, France will hope that Ettie brings the hosts the same (ahem) eggcellent good fortune her dad did.

"I want people to believe that actually going to the moon is possible, because if you strive to go as far as you can, you might just catch a star." P-Nev says he wants his England side to go into the World Cup with belief - or to become astronauts. Either sounds great.

Favourites USA have lost only once in their last 37 games, stretching back almost two years - but that was a 3-1 defeat by France in January. A repeat between the hosts and the defending champions is the final Gianni Infantino dreams of when he goes to sleep at night.

When we say 'Tough' is Lucy Bronze's middle name, we mean it literally. Lucia Roberta Tough Bronze - thanks mum and dad - is England's best player. Whether at her preferred position of right-back or in midfield, she's all-action with an eye for a spectacular goal.

The Conext 19 has a snazzy design inspired by satellite images, but underneath it's the same ball used in the 2018 World Cup. This is great news though - the Telstar 18 was a fine ball, so we know it's fit for purpose. Nobody wants to see Mad Uncle Jabulani with a paint job.

Got, got, need a retake 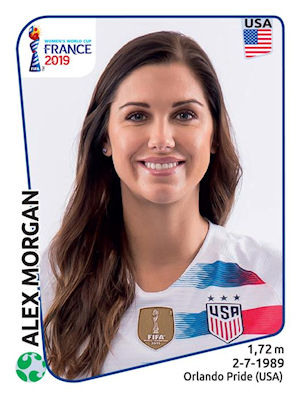 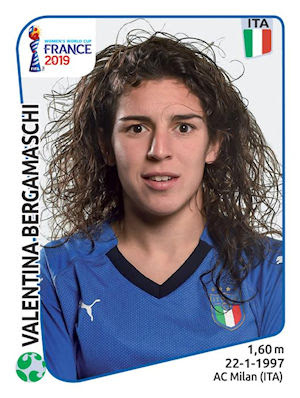 Loving the 2019 stickers but - as with the men - Panini clearly take more care with the top players than everyone else. Alex Morgan may have got sign-off on this, while Valentina Bergamaschi wears the classic "who just woke me up?" look. Carles Puyol would be proud!

Brazil midfielder Formiga is set to become the first player, male or female, to appear at seven World Cups. The 41-year-old made her World Cup debut as a 17-year-old in 1995, retired in 2016, but clearly decided she had more to give and came back in 2018. An absolute machine.

Mary Fowler is the spring chicken of France 2019. The 16-year-old Australian sensation - no relation to Liverpool legend Robbie - scored 17 goals in just 10 games at Under-20 level before making her full debut aged 15 last year. One to watch.

"We don't have balls.
But we know how to use them!"

"We don't have balls. But we know how to use them." Germany's powerful squad video confronted the challenges they've faced, with lines like: "for our first title we were given a tea set". If Germany can claim a third WWC, they definitely deserve more than a teapot.

Nine venues are in use but the Stade de France - home to the 1998 World Cup final and Euro 2016 final - is not among them. Instead, the 59,000-capacity Parc Olympique Lyonnais hosts the final from a city renowned for the all-conquering women's club side, Lyon.

Many of the 24 World Cup teams boast bespoke women's kits for the first time and plenty hit the mark. France's blue and gold effort is tres chic, England's home and red-rose away kits are both tasty, while South Korea's "tiger pattern" away shirt is grrreat.

Australia's home shirt looks like they've just finished painting the house, while Sweden's features "a pattern of horizontal lines that creates an optical effect". The optical effect being that it looks rubbish. Jamaica's eyesore away kit features approx 400 Umbro logos. No.

Just four countries have won a Women's World Cup: the USA (three times), Germany (twice), Norway and Japan (once each). Newcomers have a great shot in 2019, particularly France, England and a Dutch side which upset the odds to win Euro 2017 on home soil.

How do England do it?

The Lionesses may be catching up but there are better technical sides. So for all Phil Neville's talk of an exciting approach, expect England to play to their physical strength with Fran Kirby and Karen Carney - when called on - offering flair and vision respectively.

The winners get to keep the trophy - literally. A new £30k gong is created every four years, while there's only one men's World Cup trophy, so the winners have to give it back. Although anyone with a melon and a bucket of custard can recreate that anytime anyway.

Three UK are trying to launch the Lionesses' first ever official emoji. Show your support and sign the petition to make it happen.

'Too famous?' - Marcus Rashford slammed by Conservative commentator for not singing national anthem ahead of England vs Wales

Cristiano Ronaldo celebrated as if he had given Portugal the lead, but stadium announcer gave Bruno Fernandes the goal