Conor McGregor Set To Fight Justin Gaethje In The Summer

So just like that we're back, the close season has flown by and now the 2017/18 Premier League returns to our screens this weekend as one of the most highly anticipated amongst the football world in recent history.

New teams, new stars, new managers and new stadiums are just a few of the factors raising the excitement level ahead of the fresh campaign, however, there's one common question that's been on the lips of almost everyone.

We've seen a flurry of new attackers arriving at most of the top sides over the summer and it's now being heavily pondered who will have bagged the most goals come May.

In this article, I'll be analysing the favourites for the coveted individual award, as well as taking a closer look at how each man's contribution will benefit their club over the course of the next 10 months.

Alexandre Lacazette is no stranger to finding the back of the net, it's what he's been doing prolifically throughout his who career as a no. 9 in Ligue 1 for Olympique Lyonnais. The Frenchman has bagged 113 goals over the last four seasons, including 37 in 45 games in all competitions last terms, so he could be that world-class striker that Arsenal have been searching for since the departure of Robin van Persie.

You could argue that his previous division is nowhere near at the quality of the Premier League, and therefore Lacazette could easily flop at the Emirates Stadium like so many have done before. But, Zlatan Ibrahimović proved in his debut season in England last time around that if you've got it, you've got it by netting 28 times in all competitions for Manchester United, so you should probably think again before doubting the 26-year-old too early. It's been one of the biggest transfer sagas of the summer, as Alexis Sánchez has repeatedly hinted his interest in a move away from Arsenal for Champions League football with Paris-Saint Germain, Bayern Munich and top flight rivals Manchester City all known suitors. A reunion with ex-boss Pep Guardiola up North has been thought to be his most likely destination, but all links with a move away have suddenly halted which makes it seem like he'll represent the Gunners for at least one more season.

Sanchez was utilised as a striker for the majority of the 2016/17 campaign, which resulted in 24 goals, but he'll be pushed back out to the left after Lacazette's arrival where he'll more than likely be just as effective in terms of goal scoring. It's still a possibility that the Chilean won't be wearing red and white, but if he's playing for another Premier League club his name is bound to be up there with the other candidates in this shortlist when all 38 fixtures have been played.

After spending most of the summer on his honeymoon getting ready to sign for Manchester United once he returned home, poor Álvaro Morata even dyed his hair red in preparation for the big day. However, everything didn't quite work out as expected when it was revealed that the Reds were using him as a smokescreen in aid of their pursuit of Everton striker Romelu Lukaku, and shortly afterwards confirmed the signing for £72m.

Antonio Conte was furious that Lukaku had been stolen from his fingertips, and reacted by promptly bringing in Morata, who seemed happy to play the role of sloppy seconds in order to get away from the bench at Real Madrid. Despite not being a first choice target at Stamford Bridge, the Spaniard has pace and an aerial presence which are key attributes that indicate he'll be a hit in the Premier League, and it'd be surprising to see him fail to surpass at least 15 goals this term. Brazilian sensation Gabriel Jesus' meteoric rise from a small time striker in his homeland to Manchester City's main man up front over the space of five months has left Sergio Agüero's place in Pep Guardiola's plans up the air, but I'd feel stupid to leave him out here. You can understand why I feel this way considering he's only failed to be among the top five Premier League goalscorers in just one campaign since arriving from Atlético Madrid in 2011.

The Argentine will go down in history as one of the division's most prolific frontmen after averaging 20 goals per season over the six seasons he's been a Citizen, and produced one of the greatest moments in English football history on 13 May 2012 - you can probably guess which that is. He provided 20 goals last term, so now he has more elite service from players like Bernardo Silva and Gabriel Jesus for the whole year it'd be crazy if he isn't challenging for the Golden Boot once again.

When Zlatan Ibrahimović was released by Manchester United on 9 June to continue his recovery from the ACL injury that cut the Swede's terrific season short, Mourinho needed to bring in a very big striker to fill in a very big void. He's done that perfectly will Lukaku, because the second best striker in the country last term is a worthy representative of the no. 9 shirt at Old Trafford, and has already opened his account after netting against Real Madrid in the UEFA Super Cup on Tuesday.

Romelu Lukaku scored 25 league goals throughout 2016/17 for Everton, and would've won his first Golden Boot if Harry Kane hadn't miraculously bagged eight of his own in the final three fixtures, so the thought of what he'll be able to do in front of goal with the highly upgraded service is terrifying. Especially bearing in mind that the 3-5-2 system that José Mourinho appears to be opting for this time around works to his advantage, with wing-backs bombing forward and looping in crosses from all of the shop for him to use his power to get on the end of. I'd personally be tempted to put a bet on the 24-year-old to surpass the 30 mark after 38 games in all honesty, but I suppose only time will tell whether an instant impact will be made.

Here he is. England's golden boy, a future Tottenham Hotspur legend, and the young man who's being heavily touted to smash Alan Shearer's all-time Premier League top goalscorer record of 260. 75 goals in his first three seasons as a regular starter at Spurs has helped him achieve the last Golden Boot honours as well as second place in 2015, so it's hardly a surprise that he's the bookies' strong favourite to clinch the award for a third consecutive time.

Mauricio Pochettino hasn't brought any stars in, much to disgruntlement of Danny Rose, and hasn't let any attackers go which could be seen as a negative thing, however, the same attacking unit will have a stronger bond as another summer has gone by and that could easily result in more goals for Kane. With Heung-Min Son, Christian Eriksen and Dele Alli behind him, any tally total below 20 for the centre-forward in the 2017/18 campaign would, and should, be classed as a huge disappointment at this stage, but it's highly unlikely that'll happen. 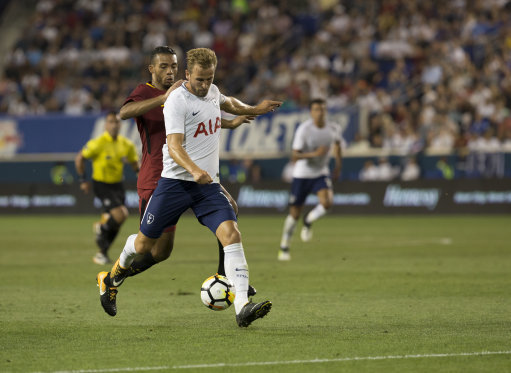 These are just a few of the names battling it out of the 2018 Premier League Golden Boot award in a season that could potentially see more goals than ever before, looking at the amount of talent in the final third.

With the amount of goals that Jürgen Klopp's Liverpool net every season we could see players like Sadio Mané, Mohamed Salah or Roberto Firmino being utilised as a striker up there competing with the other big names.

Mohamed Salah of Liverpool kicks the ball during the Pre-Season Friendly match between Liverpool FC and Athletic Club Bilbao at Aviva Stadium in Dublin, Ireland on August 5, 2017...
Image: PA

I've already mentioned that there's a big 10 months ahead for Manchester City's Gabriel Jesus who could spring a surprise challenge, while big names such as Eden Hazard and Dele Alli were lurking around the big fish last season, however, obviously aren't recognised as out and out scorers.

One thing is for certain though, all of these stars will be fully up for the individual competition which should make the 2017/18 period as superb as it's anticipated to be.

Spurs Fans Have Convinced Themselves The Club Are Signing Ross Barkley