Eddie Hearn: I Feared Anthony Joshua’s Dad Would Knock Me Out

Gareth Southgate's England side will wear their traditional home colours, teamed with navy blue sorts and white socks at the World Cup this summer.

But the kit they wore against Nigeria on Saturday afternoon wasn't the main topic of debate - it was the shirt they trained in that got people talking. Back in February, England stars Raheem Sterling, Marcus Rashford, Joe Gomez, Harry Kane, Kyle Walker and John Stones were all involved in the promotion shoot for the kits.

And the training jersey itself grabbed all the attention.

Sometimes the England shirt-makers can get it right; sometimes it's a complete disaster, but it's been an extremely long time since they got it absolutely spot on. 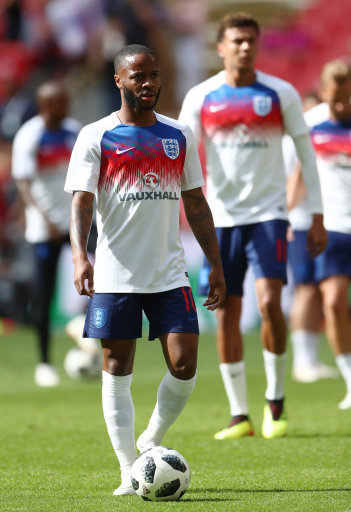 In fact, a petition was made by an England fan to make the training kit the shirt the Three Lions wear at the World Cup this summer.

As good as the simple but smart home and away kits are though, the new training kit inspired by what England wore in the 1982 World Cup in Spain, has stole the show.

Let's be honest here, it should really be the home kit for the showpiece in Russia if you ask me.

Plenty of others agreed before, during and after Saturday's 2-1 win against Nigeria, with many taking to social media to express their opinion.

QUIZ: Can You Name The World Cup Team By Their Classic Kit?

On This Day In 2001, Mike Bassett's England Booked Their Place In The World Cup In Brazil

Do you think it should have been the first kit?

The Nigeria kit is really nice, but I'm throwing it out there, the England training kit is better! ‍♂️
- Vince (@VinceFish13) June 2, 2018

if england had made the training kit the home kit then i'd be 10x more invested in the team tbh
- pippa :sunflower: (@iampippab) June 2, 2018

a day ago
UFC