Garth Crooks Trolls Us All With His Team Of The Season

Oh Garth you old wind up merchant! As we already know Garth Crooks chooses his infamous BBC team of the week on nothing but banter by doing things like putting Troy Deeney in defensive midfield. And whilst his Team of the Season is much better he's still left out one key player.

To be fair to the former Spurs player, who spends most of his days sat on the Final Score couch shouting about some refereeing decision or terrible miss by a player he's clearly taken a dislike to, his team of the year isn't anywhere near as bad as it might have been that. But to be honest that's rather p*ssed me off, stay true to yourself Garth old buddy, go for the 3-1-3-4 formation and say "f*ck you" to the rules of football!

Anyway he's still manage to amuse and confuse the world by failing to pick Jamie Vardy! Yeah he's only the league's joint second top scorer and broke Ruud van Nistelrooy's consecutive games scored in record this season. Harry Kane gets the nod in attack alongside Sergio Aguero and whilst the City man has as many goals as Vardy he's been nowhere near as impressive or made anywhere near the same impact: 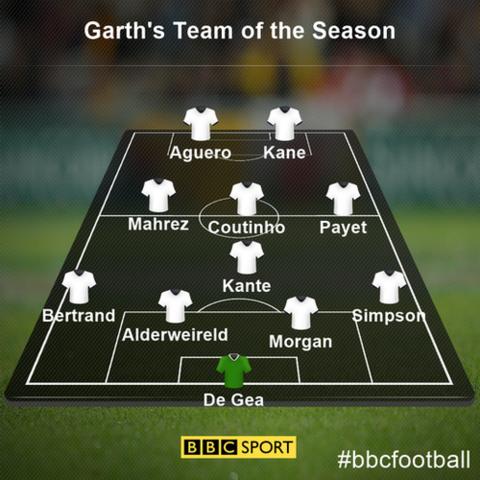 Team of the season

As well as Vardy's omission there is very much a gaping error in leaving out Dele Alli in favour of Philippe Coutinho. For a former Spurs man that's a rather glaring error, especially with some Arsenal fans calling foul on a lack of Mesut Ozil.

Of course Twitter did it's usual by letting Garth know of their displeasure:

Garth Crooks has Phillipe Coutinho in his team of the year. What planet is that man on?

Why are you surprised no Ozil in Garth Crooks' team of the season? It's a well known fact all pundits hate Arsenal for no real reason.

Garth Crooks honestly ain't got a scooby do has he! Absolutely stealing a living

Garth Crooks leaves Jamie Vardy out of his Team of the Season? Surprised he didn't have him at RB.

@BBCSport Garth Crooks is the biggest joke of a 'football pundit' ever. Coutinho in the team?! No Jamie Vardy, absolutely horrendous.

SPORTbible Pick Their Premier League Teams Of The Season

No Vardy and no Alli, but Coutinho in? Garth Crooks is on a different planet! pic.twitter.com/Y1YK3SMbRl

How Garth Crooks has a job in the football world is just unbelievable, the guy's left out Vardy in his team of the year hahahaha

Garth Crooks original team of the year before the BBC editors got a hold of it. pic.twitter.com/Ci13iK8E9n

If Garth Crooks can be employed by the BBC to give expert opinion on football, then so can I. The man is a buffoon.

Garth Crooks is such a fucking fraud. Stealing a wage as a pundit.

Garth Crooks has Phillipe Coutinho in his team of the year. What planet is that man on?

Garth Crooks put Coutinho in his team of the season instead of Alli, Drinkwater, Ozil... How the fuck is that guy PAID for his opinion

Genuinely surprised Garth Crooks' team of the season didn't include a sweeper, 3 wing backs, 4 forwards and a fly goalkeeper.

Don't listen to the haters Garth, just do us a favour and go even more nuts next time please!