Romanian Player Takes Place In Stands To Celebrate His Goal

Footballers all have their own way of celebrating a goal and some of them are iconic. However there might be nothing as brilliant as this Romanian player who literally joined the fans to celebrate his goal.

The emotion of scoring a goal leads to some wonderful moments in football, not just the goals themselves but the aftermath during the celebration.

How would you celebrate one of these goals?

Some teams love to go the route of a well rehearsed and choreographed routine, think everyone getting together as if they were the pins in 10 pin bowling and getting knocked over by the goalscorer, whereas some scorers prefer the solitude of running off on their own.

Occasionally those emotions can get the better of players as they rip off their shirts or running right up to their own fans and getting booked in the process. Or you could run the entire length of the pitch to celebrate in front of the away fans a la Emmanuel Adebayor.

One forward in Romania took the whole running to the fans to a whole new level. He got the steward to open the gate for him before clapping his own goal surrounded by young fans:

An elaborate celebration is always better than no celebration. You either get players not bothering because it's a goal against their former club, which only makes sense in certain circumstances, or the goalscorer is Mario Balotelli.

The Italian once said that scoring goals wasn't worth celebrating because it was his job, comparing it to a normal job, saying, 'a postman doesn't celebrate delivering the post,' and we thought Mario would be a fun guy at parties.

Just moments after Tony Finau sank a magnificent hole-in-one on the seventh at The Masters Par-3 Contest, the 28-year-old sprinted down the centre of the fairway to celebrate.

But as he turned to face the tee, he rolled and dislocated his ankle. He tumbled to the floor and moments later, he clicked his ankle back into place and carried on like normal. It was like something out of the Terminator.

Despite his nasty looking injury, Finau somehow managed to play the entirety of The Masters tournament.

He finished in the Top 10 after he birdied six of the last seven holes on Sunday evening, battling through the pain barrier to create history.

Images have since emerged of Finau's ankle after last week's strenuous competition and it just emphasises how brave the American is to have carried on.

He uploaded the following pictures to his Instagram story. Just check out the bruising on his ankle. Ouch. 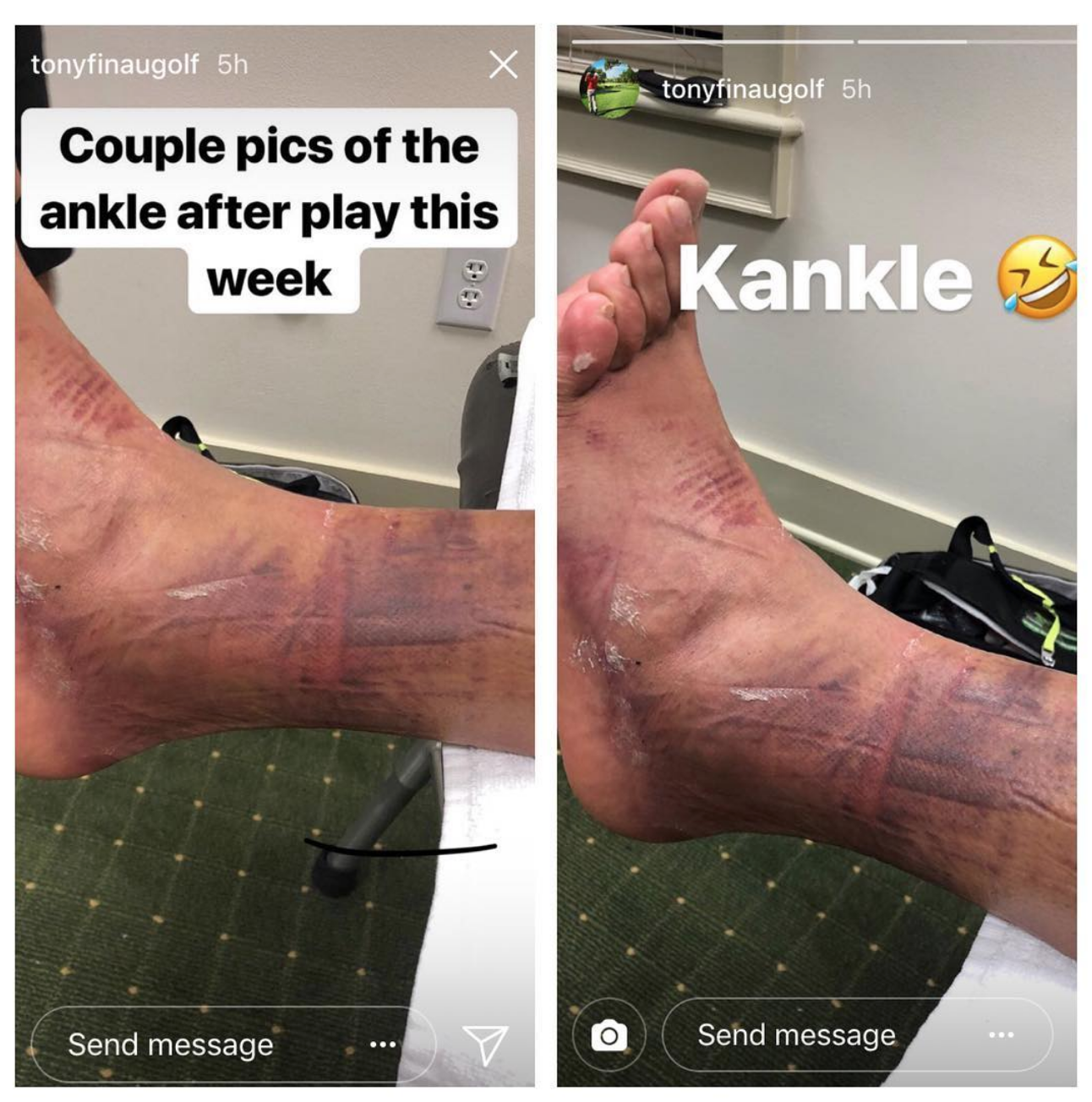 
As you can see in the following footage, Finau falls to the ground and clutches his ankle during the Par 3 Tournament, before plucking up the courage to snap it back into place, as his children looked on.

Finau's upcoming Masters tournament must have flashed before his eyes after the tumble, but luckily he was fine to continue in the coming days.

He briefly explained the situation at the Augusta National clubhouse later on in the day:

"I'm going to get it checked out." Finau said.

The fact that you kept going despite such a horrific injury says plenty about your personality and character.

The First Trailer For Arsenal's 'All Or Nothing' Documentary Series Has Finally Dropped, It Looks Fascinating

24 Years Ago Today, The Undertaker Nearly Killed Mankind By Throwing Him Off Hell In A Cell